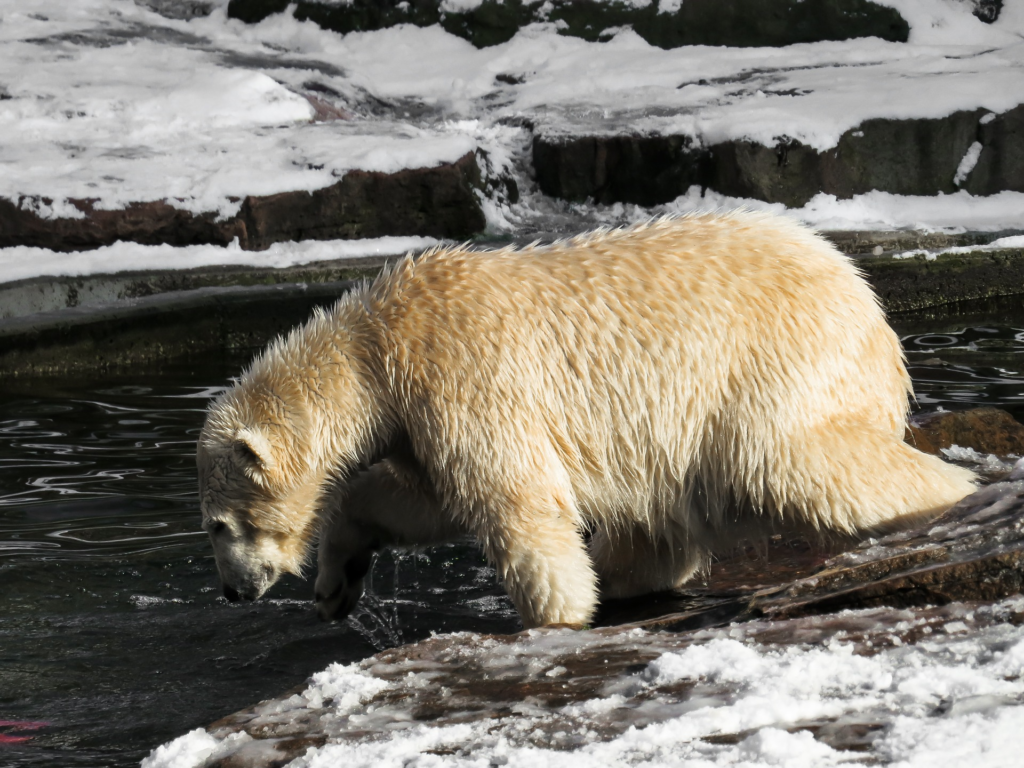 In 1907 Jujiro Wada traveled from Dawson to Herschel Island, and at Porcupine River his guide left him,
insisting Wada easily travel alone. During the last leg of his solitary travel, Wada bore witness of an
Eskimo struggling for his life with a polar bear, after his rifle failed.

In the earlier days of Yukon and Alaska, when pioneers like Wada explored the area,
among other animals, bears also were still hunted for their fur. We know from reports
that a succesful bear hunt still formed a risky thing to try.

Out in the field, skin and flesh are largely seperated,
but to save time, its skull often is still attached. The bear skin can weigh 200 kg.
Just walking with such a load is very tiresome, but then the landscape doesn`t make it easier.
Bears are most easy to track during fall, as they crowd around salmon grounds, or in spring when
snow makes place for fresh green sprouts. Most animals gather in the same areas where beavers build their structures.
When carrying your bear skin past these salmon grounds, you have to cross beaver ponds, and a lot of wet landscapes.
Beaver ponds sometimes have very deep spots, and when you loose your balance, the bear skin on your back
then pulls you down. In spring melting snow creates a lot of fresh creeks. To keep your cloths dry,
it`s best to jump over them, but carrying a bear skin makes jumping completely out of the question.
Men hunting bears are known to put on thigh-high boots, but even that doesn`t prevent them for getting soaking wet.
The bear meat is left where it was, and coyotes and birds will take care it disappears within 1 day.

Uncle Harry was the second child of Harry O’Hare and Helen Silveira Wada. He was named after his father.
He was born May 4, 1920 in Waterloo, Iowa. This past May 4th was his 100th birthday.

He and my father were close growing up since there was only a year’s difference in their ages.

END_OF_DOCUMENT_TOKEN_TO_BE_REPLACED

Uncle Harry was the second child of Harry O’Hare and Helen Silviera Wada. He was named after his father. He was born May 4, 1920, in Waterloo, Iowa. This past May 4th was his 100th birthday.

Harry and my father(Edward) were close growing up since there was only a year’s difference in their ages.

Harry was married to Elvira Marie Falcone. She grew up on Plum Street in the house next door or a couple of houses down, (can’t remember which), from my grandmother Helen’s house in San Jose, California.

They had two sons:

As children, my siblings and I called Elvira by her middle name Marie. She was a wonderful lady. So kind and nice. In later years she worked at a stationery store and if my brother and sisters and I were with my mother in town we always stopped at the store to see her. When I was older I would also stop and see her. If I needed any stationery supplies I always went there to buy them so I could visit with her.

Harry and Doris had seven children:

Aunt Doris was a wonderful woman. Very kind and caring. I remember her smile and her laughter. Sadly she passed away in 1972 in a car accident. It shocked us all when we heard the news.

We cousins played together when we were young. Uncle Harry and his family moved to Los Angeles and we rarely saw them. Every once in a while they would come to Santa Clara and visit us and my family visited them when they lived in Anaheim in the Los Angeles area in 1970.

They lived near Disneyland. They had friends who worked there and they got us a lot of tickets for the rides so we didn’t have to buy any. That was a fun time.

The house they lived in had a swimming pool. It was summer time when we were there so it was hot. The older cousins jumped off the roof of the house into the pool. I watched them and thought how fun that would be. I never did it because I was afraid of heights.

After that trip we didn’t see them for several years. I’ve reconnected with some of my cousins in the last few years and I’m enjoying getting to know them.

Jujiro Wada, A Japanese American Pioneer in Alaska : His life and the situation among three people who cooperated in finding a goldmine (Noriko Kan)

This paper focuses on an illegal immigrant named Jujiro Wada who stowed away on a ship bound for the U. S. mainland in 1892. The first section introduces the research that was conducted in both Ehime, Japan and Alaska, U. S. A.

The next section overviews the resources collected in both locations and describes Wada’s individual immigration history.
Wada is particularly notable for his pioneering experiences in Alaska and Canada, which were frequently reported in the newspapers. However, his exposure to the media diminished after he found a goldmine with two other people. He then remained in obscurity until he died alone in 1937. The third section profiles the two people with whom he found the goldmine, paying special attention to their ethnic backgrounds.

Finally, the paper compares the tone of the later lives of these three people, contrasting the world’s international situation with their own, and concludes that the fading of Wada’s name from the media was caused by the pervading fear of the “Yellow Peril.”

The Aurora Walk is a short path along the Ishite River by Wada’s statue, and has been recommended as one of the Top views in Matsuyama. However, the path is unfamiliar to both tourists and residents. The walk is primarily maintained by senior citizens of Hinode.  However, the Welfare committee requested help from Takunan Junior High School.

Students: What motivated you to promote and make Wada Jujiro more known to the public? Mr. Ueoka: We wanted to let the people of Hinode, where Wada grew up, know about Wada’s pioneer spirit and devotion to his mother, so we founded JWMA ( Jujiro Wada Memorial Association )

Students: What message would you like to deliver to Takunan Junior High School? Mr. Ueoka: Wada went abroad at the young age of 17, pioneered an unknown land, and faced racial discrimination. He was dragged down by adversity and even became a crime suspect. Despite the adversity that tried to drag him down, he went on to succeed. We’d like for students to know his hardships. and to apply his experiences to their daily lives. His experiences may encourage those struggling to cope with difficulties in their lives.

Students: What message would you like to deliver to Takunan Junior High School? We would like the local community, students, and elders, to make a habit of regularly maintaining this path, and in doing so, to foster a good community. Students: How do you see this path in the future? Mr. Kondo: We would be thrilled for you to visit this path to learn more about Wada , who was an inspiration to many.

Date: 2020. Feb. 4th In 2019, the Beverage Industry Environment Beautification Association’s (BIEBA) President Award was given to Takunan Junior High School for its long-term community clean-up efforts. BIEBA* consists of six companies and started awarding prizes from 2000. All elementary and junior high schools are eligible to enter.

BIEBA selected 4 schools for the President Award, 6 schools for excellence award, and 25 schools for prize of excellence. Takunan Junior high school has cleaned up the local community for over 40 years.  From 2018, they started to clean up around Wada’s statue (Ishite River bank area, Hinode). The delegation from BIEBA handed the President Award to the class representatives (Ms. Murakami and Mr. Aoki; pictured)

Valuable information about Jujiro Wada and his life story was brought to Japan by the 2nd generation Japanese-American Norio Mitsuoka.