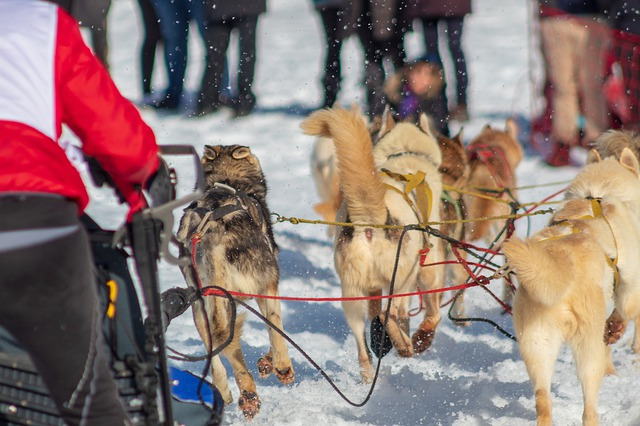 The snow was especially hard and hurtful at this point of their journey. To reduce the pain at their feet, Wada made socks for his dogs out of his own spare cloths, made of deer hide. Nowadays dog socks are standard item called booties.

The pioneers of of the Iditarod trail, Wada and Cotter, run into problems with the foot soles of their lead dogs, due to the long distance over hard frozen ice.

The soles of the feet of sled dogs are robust and snow doesn’t stick to them. The soles of their feet might seem trivial, however this is the part of their feet that constantly comes in contact with the snow. When temperatures are below -30C, ice crystals become like shattered glass, and dogs can get wounded on their feet. It’s at such moments that there are differences in the degree dogs get wounded on their feet, depending on whether they have strong or weak foot soles.

Furthermore, dogs sweat at the soles of their feet, and depending on the quality of the fur on their feet, snow sticks to the fur and forms large snow balls, and that can become ice balls. Such ice balls cause injuries to the dogs’ feet. If wounded at the sole of their feet, it can form pus, or otherwise the pain can make their appetite go away, making it necessary to retire them in the midst of the race. To avoid such a scenario, dogs with weak foot soles need to always wear a kind of socks -called booties.

As it is a lot of work for the musher to make them wear these booties, the best is to use dogs with strong foot soles as sled dogs, thus avoiding all of this trouble. To breed excellent dogs suitable for racing, one has to think of all these details.