This year, 150 year has passed since the beginning of Meiji Era (1872 – 1912), we will hold a talk show about three great people from Ehime prefecture who played an active part in this era. Jujiro Wada (an pionner), Noriaki Mizuno (soldier who complained anti-war), and Shigetoshi Shigemi (Soseki Natsume’s rival)

Three women who are active in various fields such as Miki Enoki, NHK World Executive Producer, who will lead the talks, Setsuko Kaida of “Mikan Ichiza“, and Noriko Kan of NPO president of Item Matsuyama. 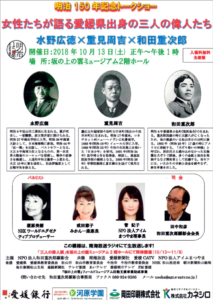 前: Jujiro Wada is currently being exhibited at Hokkaido Museum of Northern People from July 10 to October 10, 2018.
次: Cultural exchange in honour of Jujiro Wada and Felix Pedro